The Mars Perseverance Rover, launched in July 2020 by NASA finally landed on Martian soil on February 18th, 2021 along with the first drone on Mars, Ingenuity, perched on the underbelly of the Perseverance Rover. Ingenuity, also known as the Mars Helicopter, is an unmanned aerial vehicle (UAV) with twin counter-rotating carbon fiber blades to help fly in the thin Martian atmosphere.

The Ingenuity drone is built to withstand the Martian environment. The air on Mars is 99% less dense than that of Earth. This makes generating lift comparatively difficult. However, the drone’s lightweight coupled with powerful rotors could make the first flight easier. Here’s a look at what the drone packs: 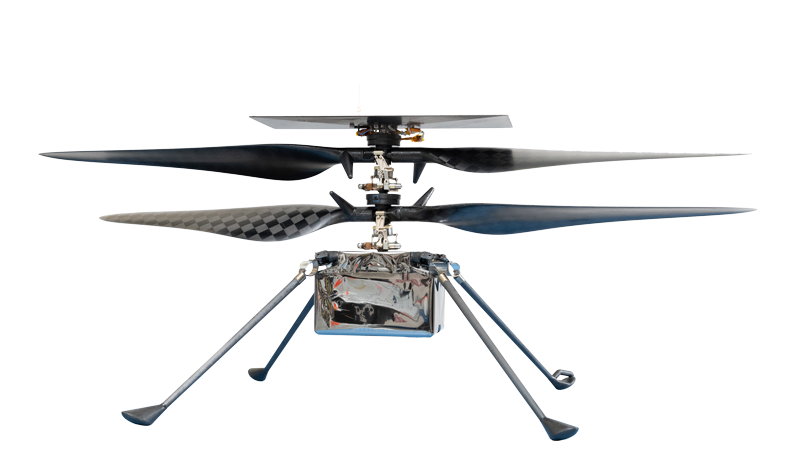 The drone’s legs and blades are made up of carbon fiber, thereby allowing it to be strong and ultra-lightweight. The main body houses the batteries, avionics, sensors, cameras needed to navigate and communicate with the base station on Earth.

Ingenuity faces several key challenges before its first flight. In the nights, the Martian temperature dips to as low as minus 130-degree Fahrenheit (minus 90 degrees celsius). That means that the drone would have to autonomously combat this temperature drop and warm itself to remain functional. Additionally, Ingenuity is an autonomous drone. That means that from take-off to landing, all operations will be headed by the drone’s onboard computers with very few pre-sent instructions from Earth.

When is the drone’s first flight?

According to NASA, the drone will remain attached to the Perseverance Rover for 30-60 days. After this, the rover will safely deploy the Ingenuity drone on Martian soil, unfolding and releasing it slowly into position.

Once the drone is positioned on-ground, it will have to survive the freezing Martian nights and charge autonomously using its solar panel. If the drone manages to survive, it will confirm communications with the rover and flight operations back on Earth. Finally, the drone’s rotor blades will be spun and tested for the first time, following the first flight of 20-30 seconds and landing.

If successful, this will open up a whole new aerial dimension of Martian research. Drones provide unique aerial data which is not possible to obtain from the rover or satellites. This could pave way for successful human and robotic missions with more advanced UAVs that could perhaps, even carry payloads from one sight to another.

The Gujarat Drone Mahotsav 2021: All You Need to Know

Walmart and Zipline Partner Up For Last-Mile Delivery

Autonomous Racing Drone Flies Through a Forest Without Crashing